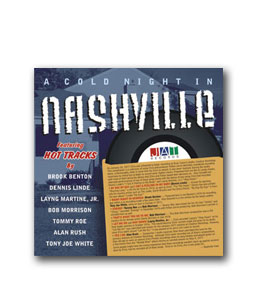 A Cold Night In Nashville
The First Release From J.A.T. Records!

August 24th, 2004 marks the launching date of a new independent label J.A.T. Records. Formed by Joseph Tunzi, the label will release the CD, A Cold Night In Nashville, a compilation that focuses on what was to be the future direction of Elvis Presley’s recording career.

Chicago (August 5th) - In January 1977 Elvis Presley flew to Nashville to finish his Moody Blue LP at Creative Workshop studios. Unforeseen circumstances made Elvis cancel these sessions, but he still intended to record the new material for future release. While he died before he could begin the new sessions, six songs had already been selected. A Cold Night In Nashville gathers together these tracks for the first time.

A Cold Night In Nashville is one of the rare collections that let’s you explore the music inside and out. Two versions of “Rainy Night In Georgia” and “Energy” are included. Like all of the other tracks, a version by the composer is featured, but for these two tracks we also get the opportunity to hear a commercially released version. Adding even more value to this feature is that in the case of Brook Benton’s hit rendering of “Rainy Night In Georgia”, A Cold Night In Nashville spotlights a rare alternate take. Also included are two bonus tracks which feature the original demo’s for two of Elvis’ most contemporaneous rock songs “Way Down” and “I’ve Got A Feelin’ In My Body”. Composed by Layng Martine Jr. and Dennis Linde respectively, both were songwriters Elvis held in the highest regard. With Dennis Linde’s “By Day, By Day” and Layng Martine Jr.’s “Let Me On” included among Elvis’ selection of new songs, it is fascinating to hear how his final masters differed from these authors earlier submissions.

Even if Elvis did not get to record his six selections personally, they reveal that his growth as an artist was still thriving at the time of his untimely death. Even if one ignores its historical signifigence, A Cold Night In Nashville stands up as a great collection of music. This various artists release features: