Available late spring of 2005!
A photographic memoir of the making of Elvis Presley's two "in person" films. 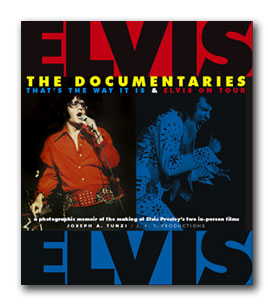 Elvis: The Documentaries
By Joseph A. Tunzi

Late spring of 2005 from J.A.T. Publishing comes Elvis: The Documentaries. Joseph Tunzi has put together a beautiful 125-page photo journal that will take you into Elvis Presley's two acclaimed documentaries, including That's The Way It Is, and Golden Globe winner Elvis On Tour.

In 1970, Elvis Presley was in the middle of the greatest musical comeback any entertainer ever experienced. The most exciting aspect of his return was his triumphant Las Vegas return to the concert stage. He decided that a film chronicling his live performances would be a way to convey where he was at today and entertain those who could not come out to see him. The resulting film was That's The Way It Is, a movie Elvis called his best in a decade.

In April, 1972, Elvis took off on his fourth tour of the 70's and the cameras went with him. The concerts and the film that resulted, Elvis On Tour, were rapturously received. Elvis On Tour remains the only time Elvis publicly reflected on his life and it was awarded the Golden Globe for best documentary of 1972.